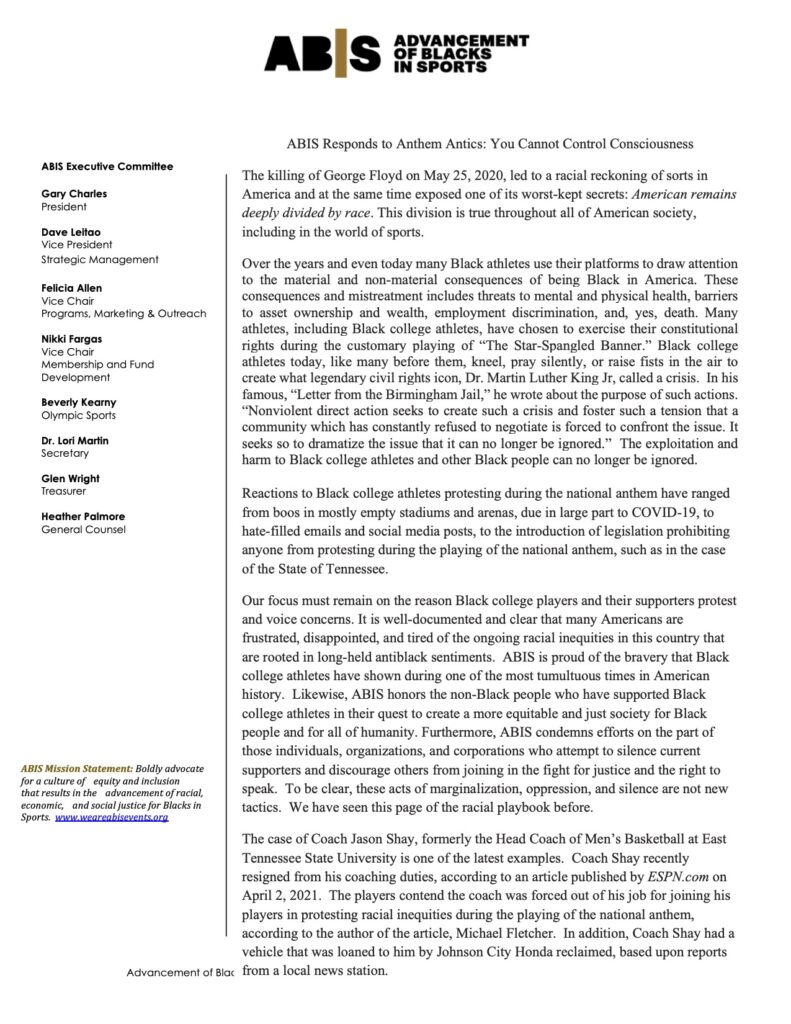 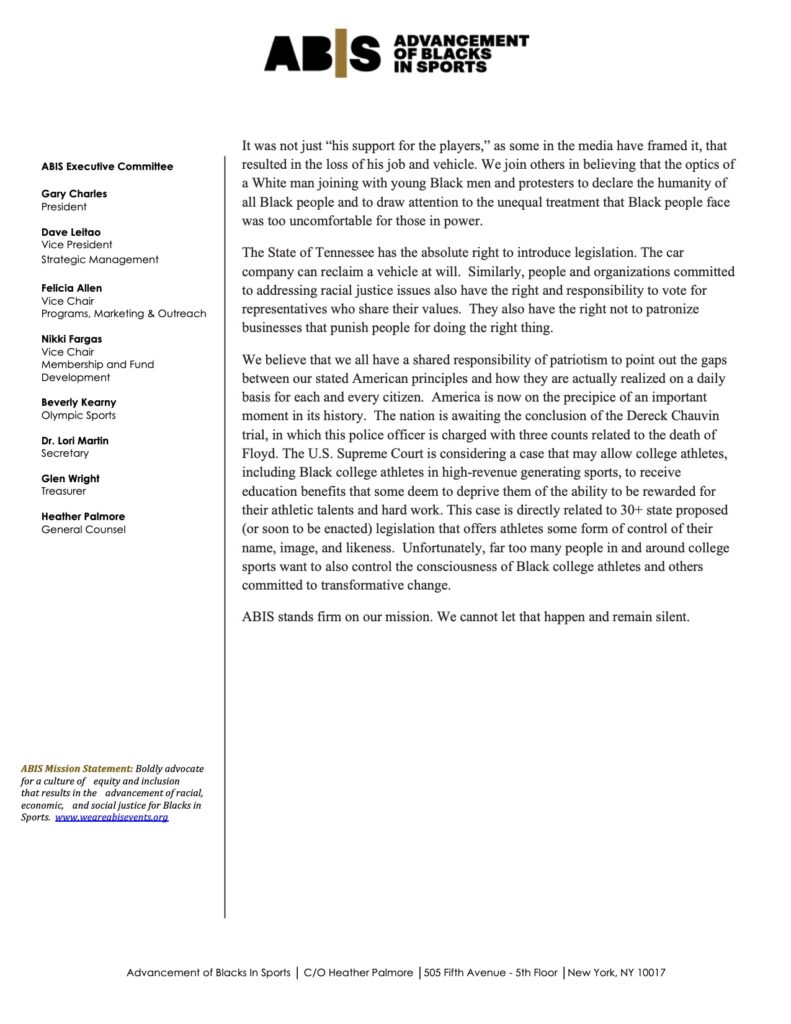 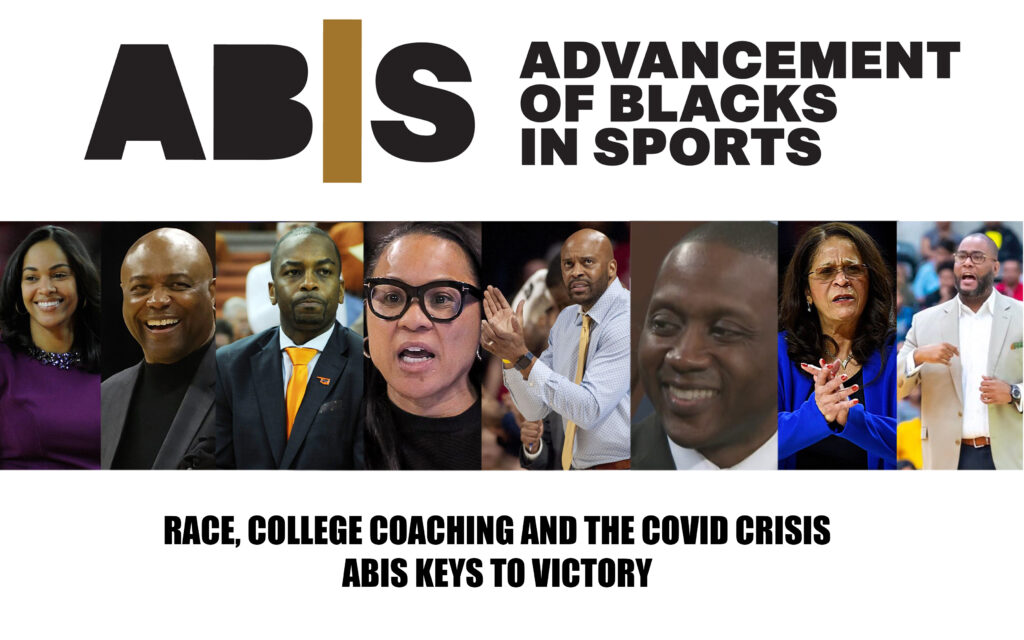 Tis the season for March Madness. Sadly, it is also the season for letting go of college coaches.  Yesterday, marked the first “Black Monday” since the Men’s Basketball tournament was cancelled in March 2020 and the killing of George Floyd.  “Black Monday” is the Monday before the start of the NCAA Men’s Basketball Championship, and it is also the day that many coaches learn that their services are no longer needed.  Many people agree that we are still living through a coronavirus pandemic and a racial pandemic.  Just about every social institution in America has been affected by both and college sports is no exception.

The NCAA should encourage its member institutions to show the same sensitivity and grace they extended to college athletes to college coaches.  Black college coaches, who are already at greater risk for losing their jobs and not being rehired than non-Black college coaches, are particularly endangered and vulnerable.  Craig Meyer, Pittsburgh Post-Gazette, asked explored why Black head coaches were so rare at top tier of college basketball in a piece published on November 3, 2019

Brent Schrotenboer of USA Today, commented that “Plenty of white coaches get recycled in college football,” in an article published on November 19, 2020

There are three keys to moving forward:  hire more Black coaches, commit to retaining and promoting Black coaches, and place a moratorium on the firing of coaches.

Eddie Robinson and John Thompson were considered two of the greatest college coaches in the history of sports. These legendary black coaches were not only considered great because they were are good at winning. They were considered among the best to ever coach in college sports because they treated their players as total human beings. They realized long before many others that their Black lives mattered. As more people in sports from the grassroots- to the professional-levels join the movement, they must move beyond mere symbols to a set of standards that will serve as evidence of the industry’s commitment to the very athletes whose success makes their prominence and prosperity possible. At the very least, there must be a reckoning with how Black head coaches, particularly at the college level have been disadvantaged over time and within the context of the economic impact of the pandemic on Athletics Departments across the country, but especially in big-time college sports.

Sadly, the numbers are all too familiar.  Black men and women are underrepresented as head coaches in high-revenue generating sports in the Power Five conferences.  At the same time, Black men and women athletes are overrepresented.  Cameron Teague Robinson and Jon Hale published an article highlighting the racial disparities in coaching at the college-level in an article appearing on June 29, 2020, in Courier Journal.  “Of the 1,073 head coaches in the NCAA sports at Power Five programs, only 79, or 7.4% are Black.” The writers also found that “of the 65 Power Five schools, 15 do not employ a single Black head coach.” Moreover, “All but six Power Five programs have two or fewer black head coaches.” Track and Field was the only sport with more than 15 Power Five Black head coaches, according to Robinson and Halle.  There were 11

The writers reported that in 2019, 51% of men’s basketball players in the Power Five were Black. Nearly 20% “of athletes in the Power Five conference were Black in the 2018-2019 school year.”  Unfortunately, there are far too many issues between the predominately white coaches and the Black players.  These issues range from the use of inappropriate racial language to endorsements of anti-black sentiments to bullying and racial discrimination.  One need only look at the recent cases involving Oklahoma State, Iowa, and Clemson.  Mike Gundy of Oklahoma State sported a t-shirt with a logo that is associated with anti-blackness.  Coach Chris Doyle at Iowa was accused of bullying black platers.  Coach Dabo Swinney at Clemson was criticized for not doing enough about his Assistant Coach Danny Pearlman’s use of a racial slur.  Head Coach Greg McDermott at Creighton University used the term “plantation” in a post-game speech after a loss to Xavier.   Gundy, Doyle, and Swinney are all white head coaches.

With the recent hiring of Earl Grant at Boston College, the ACC now has four (4) Black men’s basketball head coaches while the Big 10 Conference only has one (1) and the Pac 12 (0).  The SEC and Big 12 each has two (2) Black men’s basketball head coaches.  We are proud to report that the only two (2) Black Head Coaches in the Big 12 Shaka Smart at Texas and Mike Boynton, Oklahoma State Head Coach made history this year when their teams competed against one another for the Big 12 Conference Tournament Championship.  In women’s basketball the SEC administrators hired five (5) Black head coaches while the ACC has four (4); Pac 12 has two (1); Big 10 only (1); and the Big 12 zero (0).  The SEC Women’s Basketball Championship Game created another historic moment when South Carolina’s Dawn Staley (2021 Olympic Head Coach) and Georgia’s Joni Taylor (SEC ’21 Coach of the Year) became the first two (2) Black Head Coaches to compete for the SEC Championship.

Colleges and universities must keep the attention and momentum focused on the current movement focused on addressing anti-Black sentiments and persistent racial inequities throughout American society, including in college sports.  The introduction of the Russell Rule is an example of a policy aimed at making college Athletic Departments more diverse.  Unfortunately, the Russell Rule, which was introduced by the West Coast Conference (WCC), does not go far enough for two reasons.  First, the Russell Rule is race-neutral.  The rule calls for hiring people from underrepresented groups and is not specific to Black people or to Black coaches.  Secondly, the Russell Rule does not address issues related to retention and promotion.

What is needed is a standard adopted throughout colleges and universities, but especially among high-revenue generating sports in the Power Five conferences, which emphasizes the commitment to not only hiring more Black head coaches but also retaining them and promoting them in even the harshest times—The C. Vivian Stringer Standard.  Named in honor of one of the winningest women’s basketball Black head coaches to ever coach at the college level with more than 1,000 career wins.  In 2020, Coach Stringer earned the honor of the most 20-win campaigns for a head coach in women’s college basketball history, as C. Vivian Stringer passed the legendary late Pat Summit with 37 seasons having accomplished that high water mark. It is imperative that we center the experiences of Black women head coaches as well as black men coaches, hence the name of the standard introduced here.

The current pandemic has cost Athletic Departments billions of dollars in lost revenue.  Like many other institutions, when it is time to trim budgets, Black people and Black-centric programs are often the first to go.  It is often nearly impossible to prove that race is the driving force behind these measures.  Instead, Athletic Departments that are dominated by white leadership may cite explanations other than race for the dismissal of a Black head coach, such as poor performance, loss of revenue.  College Athletic Departments must be willing to be honest about the role that race and racism have played in the past and currently and commit to doing better.

COVID-19 has not only impacted College Athletic Departments financially, but it has also impacted how coaches perform their respective duties.  It has impacted so many areas, including recruitment, monitoring academic success, strength and conditioning and return to play. This list does not begin to account for the effect of COVID-19 on the overall health and wellness of athletes and coaches.  Consequently, College Athletic Departments should revisit current practices that may negatively impact some coaches more than others. Specifically, college coaches should be assessed in light of a new, unprecedented playing field. Coaches are being asked to lead their programs through a time of such great uncertainty and therefore the standards for successful leadership have to be measured within these contexts to include more than mere wins and loses. It’s conceivable that a coach could exhibit tremendous leadership through these times and conveniently be judged by the coach’s record. NCAA passed legislation that allowed college athletes to get this year back, due in large part, because we have never experienced dual pandemics of this magnitude. If governing bodies have already deemed that it is unfair to penalize student athletes for such profound circumstances beyond their control, then how should coaches be judged under these same circumstances?  Therefore, the NCAA should call upon its members to automatically extend the contracts of coaches for one-year.  Coaches have the option to opt-out.

It is nice to see patches on the uniforms of college players with social justice messages.  It is refreshing to see #BlackLivesMatter on the floors in arenas in colleges and universities across America.  However, we need some substance to support the symbols. Thus, ABIS calls for the hiring of more Black Head Coaches at the Power 5 Level and all levels of Division I athletics. 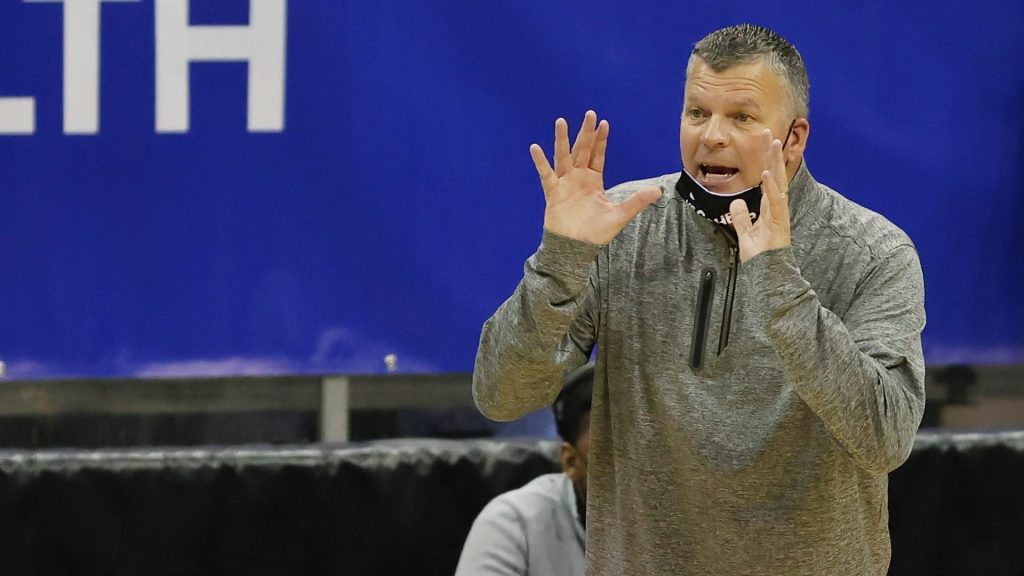 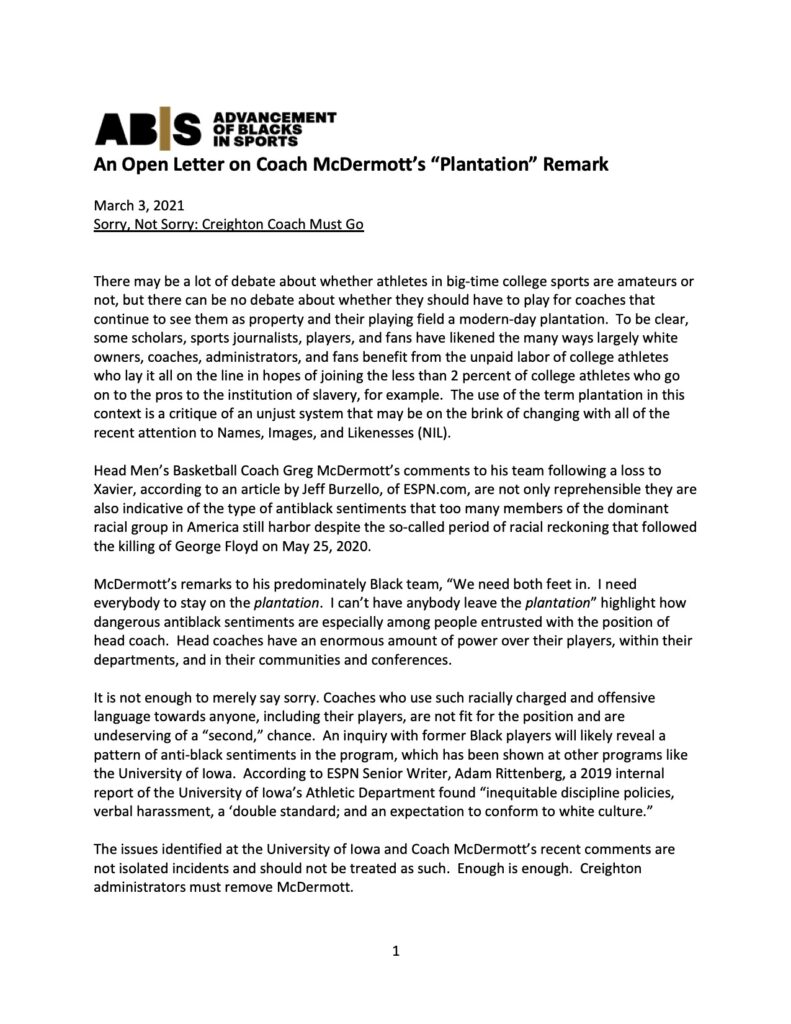 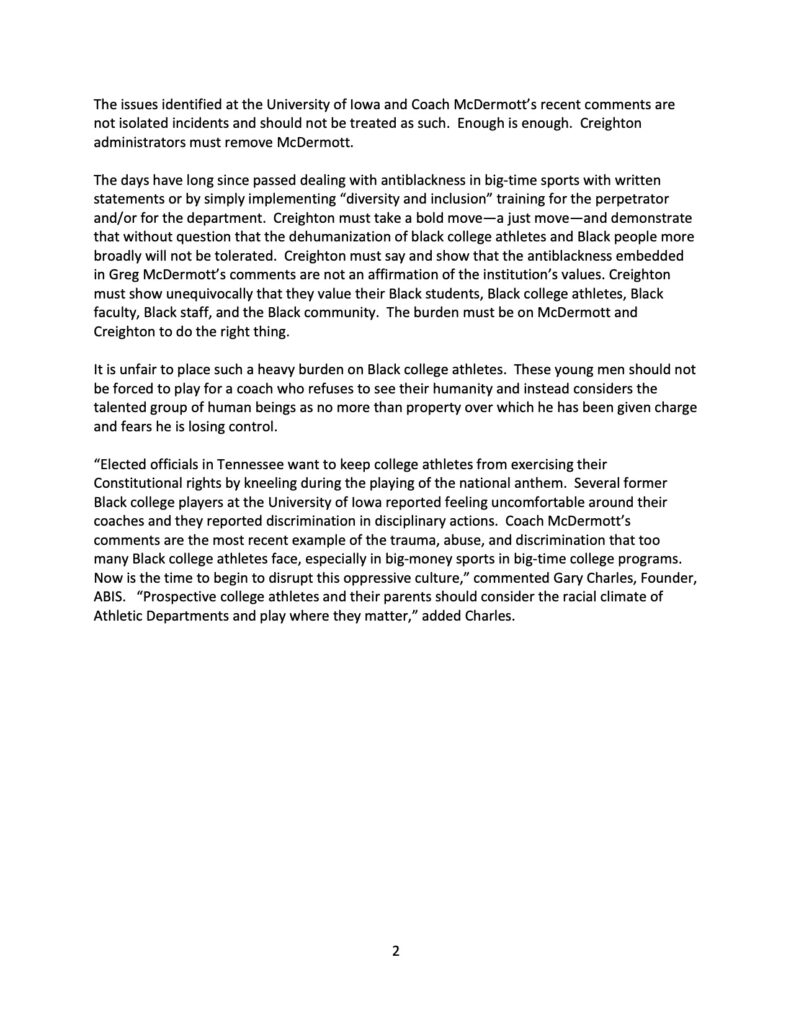 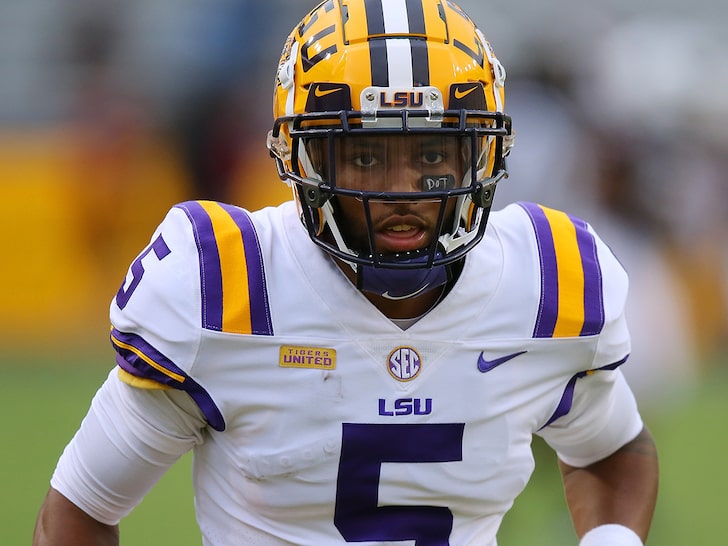 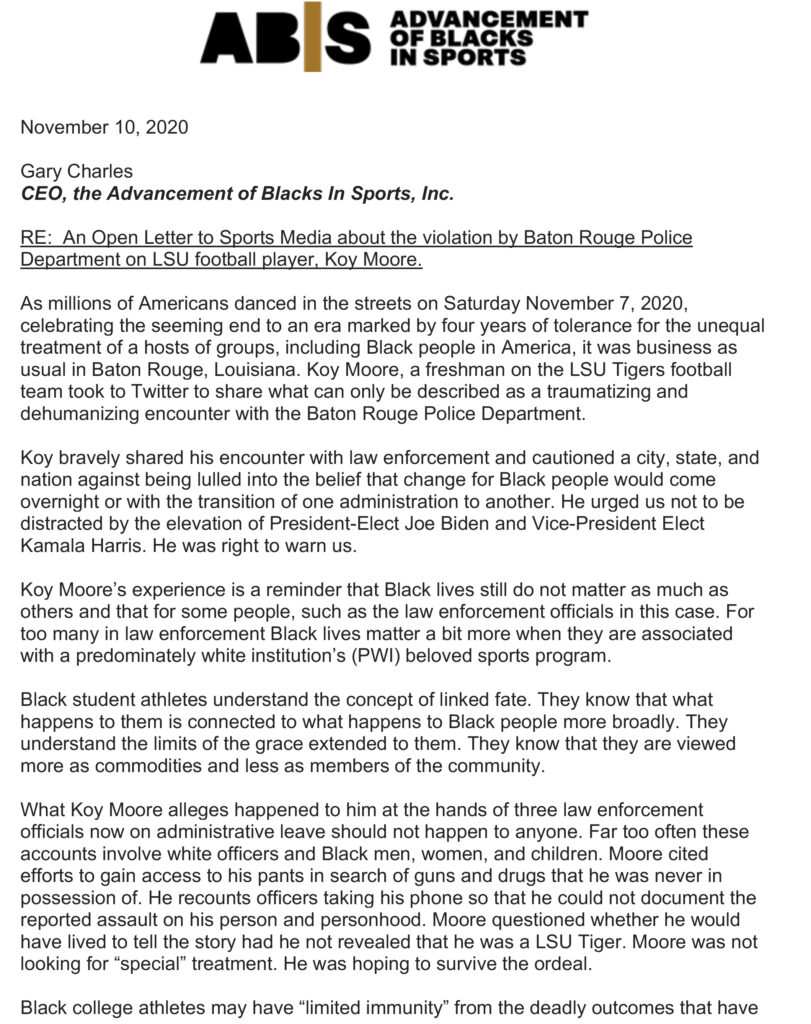 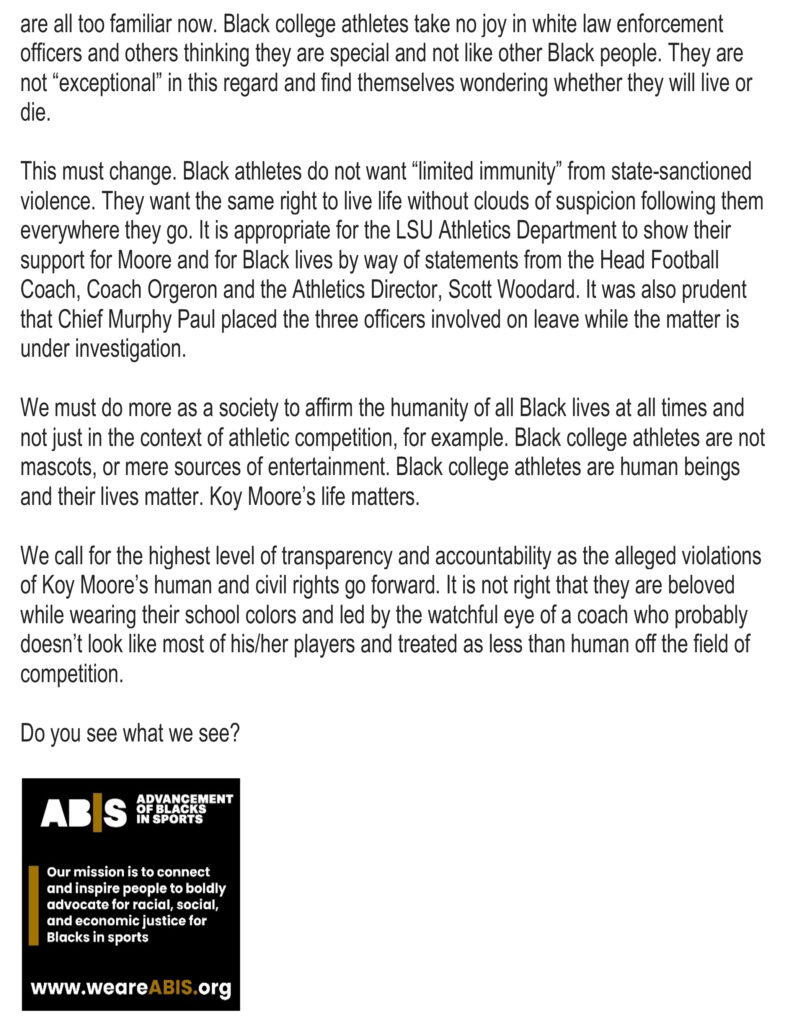